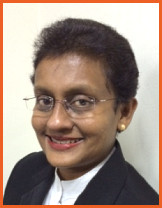 Sheena graduated with an LLB (Hons) from the University of London in 1988. She was admitted to the Honourable Society of Lincoln’s Inn in August of 1988 and called to the English Bar in 1989. She was admitted as an Advocate & Solicitor of the High Court of Malaya in 1990.

Sheena has conducted numerous cases in the Malaysian Courts appearing regularly in the High Court and Appellate Courts and has a number of reported decisions to her credit. Sheena has appeared as Counsel in arbitration proceedings involving disputes arising from construction and engineering contracts including PAM, IEM and JKR standard forms of contracts. Sheena has also handled selected criminal litigation during her tenure of practice.